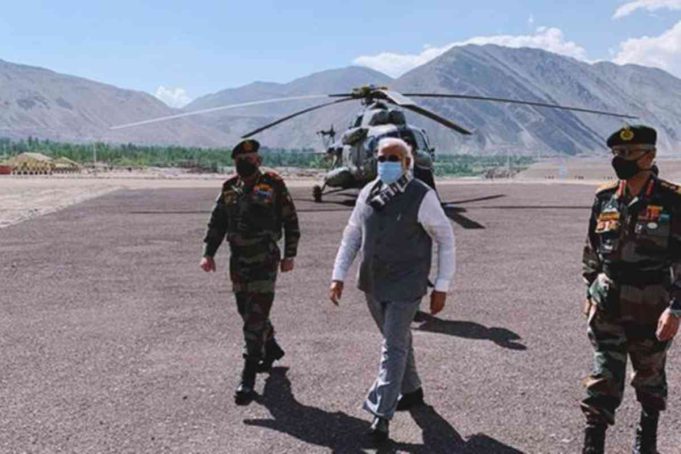 PM Modi’s visit to Leh and front line posts of LAC just within a fortnight of eye-ball to eye-ball confrontation between Indian Army and People’s Liberation Army (PLA) in which 20 of our brave hearts got martyred after killing 43 Chinese soldiers and injuring some, speaks volumes about his leadership. He has not only emerged as one of the top gutful leasers of the world but set an example for world leaders of leading from the front.

Prime Minister Narendra Modi made a surprise visit to a forward post in Ladakh as a morale booster for our forces deployed there. Modi showed how hands on he was when it came to the defense of the country. This he did during Doklam as well, when according to Chinese defense analysts, Xi Jinping and the CCP were shocked that India would go to fight over land that was a part of Bhutan.

In a strong message to China, Modi said: “the era of expansionism is over, and history is proof that expansionists have either lost or were forced to turn back.” The Prime Minister added that bravery is a pre-requisite for peace and that those who are weak can never initiate peace.

He can be called as father of modern India as only a father can give the love like this. He not only thundered at China from the LoC but boosted the morale of our brave hearts by by visiting the injured soldiers in the hospital. This has left the entire world speechless at the same time has irritated and rattled China. I have never seen another PM in my lifetime do this.

Modi is the only world leader I can think of who has worked without a single day off for six years. He works 12 to 16 hours a day even when he visits foreign countries. He has done more for India in six years than any leader in India that has been there before him.

“Your bravery and dedication is unparalleled. Your courage is higher than the highest regions where you all are stationed. Bharat Mata’s enemies have seen your fire and fury. Your arms are as strong as the mountains that surround you. Your confidence, determination and belief is as immovable as the peaks here. The conditions in which you all deliver your best are among the toughest in the world, and you have proven time and again that the Indian armed force is mightier and better than everyone else in the world. What you have done here, the message you have sent, is a message that has reached the world.” It has been a bold statement.

“I want to salute you all and all the soldiers who laid down their lives for the motherland. Every corner, every stone, every river and every pebble here in Ladakh knows it is an integral part of India.”

Hearing these points made by one of the world’s most respected leaders, the Chinese spokesman was quick to react saying India should not do anything to stymie the discussions under way, which really means they are wary and scared.

On the contrary, the PLA is upset about the fact that India honoured its brave hearts with the sendoff they deserved and every Indian saw this on live news but China has not even reported on their dead in Galwan and citizens on Weibo actually asked why?

Adding to the above, China due to Xi’s and the CCP policies have alienated China from most of the civilized world. With the draconian steps introduced in Hong Kong; the way the Coronavirus was literally
exported to the planet; the 300 plus debt to GDP that China has built up; the failure of the Belt and
Road Initiative; and a dedicated push by the world to decouple itself from the supply chain of China, the storm is brewing to take this international pariah out of the world economy.

To make it worse China is going through the worst floods it has faced in 50 years. Twenty nine provinces in China are facing billions of dollars’ worth of damage and major cities have had whole blocks washed away by floods, landslides and factories under water. With Hong Kong burning and China being called out for all its mad incursions into the South China Sea, at this moment of time it seems like Xi is facing what has been written about in classics:

This keeps coming to my mind when I research Xi Jinping and what his ambitions have done – to alienate every country that was trading with China and helping it to become the second largest economy in the world. He has single handedly created the perfect storm, to make China look hegemonic, deceptive, and untrustworthy in every sphere and he has created a backlash that will either haunt him or destroy him and his party.