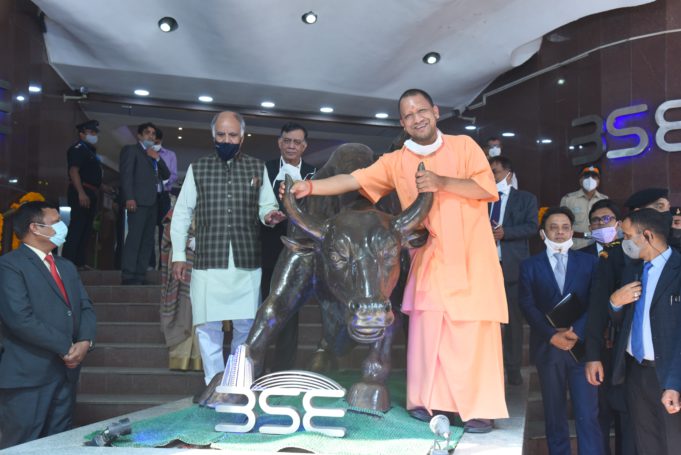 Mumbai, NFAPost: The Lucknow Municipal Corporation which raised 200 crore via Municipal Bonds on private placement basis using the BSE bond platform listed on the exchange. It received 21 bids and subscribed by 4.5 times.

Corporation received bids for Issue size of Rs 200 Crs within 60 seconds of the issue opening, which opened for subscription on 13th November 2020.  It’s one of the 8 cities in India that have capitalized on the new guidelines to fund the AMRUT and Smart Cities Mission to raise an aggregate of 3690 crs as per Govt released data.

The capital raised is proposed to partially fund the Amrut projects and other infrastructure projects which had a earmarked requirement of INR 3,109.5 mn. The AA Stable and AA(CE) Stable rated bonds by India and Brickwork Ratings have a tenure of 10 years and states that the principal amount will be paid in 7 instalments from 4th and 10th year.

The coupon rate of the taxable bond was fixed at 8.5% per annum. The actual cost of borrowing will be approx. 7.25% after considering Rs 26 Crs incentive from Government of India for raising Municipal Bonds.

Speaking on this momentous occasion, Chief Minister of Uttar Pradesh Yogi Adityanath stated it is a matter of pride for UP that the Lucknow Municipal Corporation has raised Rs 200 crore through its bond issue which got listed on BSE.

“It is the trust of the investors which UP has earned during last three and a half years of governance. It will augment our effort to improve infrastructure in urban areas and it shows the improvement in the Industrial climate of the state and the trust the investors have reposed in the state machinery,” said Chief Minister of Uttar Pradesh Yogi Adityanath.

On the occasion of the listing of the bonds, MD & CEO of Bombay Stock Stated Ashish kumar Chauhan he would like to congratulate Lucknow Municipal Corporation for successfully raising Rs. 200 Crore by issuing Municipal Bond on BSE Bond platform.

“The order book was filled more than double in a matter of few minutes establishes Lucknow Municipal Corporation as a credible entity in the Indian bond market. BSE firmly believes that the Indian bond market has the potential for substantial growth. BSE Bond platform has helped bring in transparency and efficiency in price discovery for a private placement of debt securities and the platform enables to subscribe seamlessly,” said Ashish Kumar Chauhan.

“I feel proud to say that A.K. Capital has been a leading Merchant Banker in the Municipal Bonds space in terms of volumes. Lucknow Municipal Corporation bonds are backed by strong structured payment mechanism making it a secured investment with an attractive return for the investors,” said  A K Mittal.

Indian Municipal Bond market is at a very nascent stage compared to the US Municipal Bond market but given the rapid pace of urbanisation, it is going to play a pivotal role in shaping the urban infrastructure sector in the country.” The Merchant bankers to the bond issue were A.K. Capital Services Ltd and HDFC Bank Ltd.

Uber, Lenskart partner with Ministry of Road Transport and Highways

Indoor Air Purification Market to be Valued at $ 37.94 Billion...