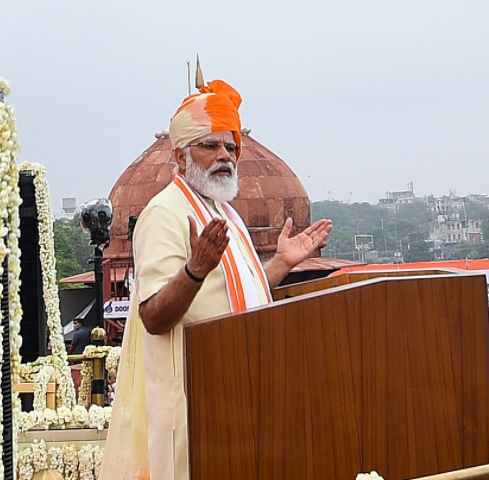 Prime Minister’s Narendra Modi’s ambitious programme Digital India got another momentum at his 74th independence speech when he announced three landmark initiatives including connecting all Indian villages with optical fibre cable connectivity in the next 1000 days.

Launched on 1 July 2015, Digital India initiative is both enabler and beneficiary of other key Government of India schemes.

“In the coming 1000 days, every village in the country will be connected with optical fibre cable,” Prime Minister Narendra Modi said in his address on the occasion of 74th Independence Day earlier today.

He further added that Participation of rural India and villages in Digital India is very important for balanced development of India. To enable this we will rapidly expand our optical fibre network. This will reach all the 6 lakh villages within 1,000 days.

Digital India aims to provide the much needed thrust to the nine pillars of growth areas, namely Broadband Highways, Universal Access to Mobile Connectivity, Public Internet Access Programme, e-Governance: Reforming Government through Technology, e-Kranti – Electronic Delivery of Services, Information for All, Electronics Manufacturing, IT for Jobs and Early Harvest Programmes. Each of these areas is a complex programme in itself and cuts across multiple Ministries and Departments.

Commenting on the PM’s announcement, Union Minister for Electronics &IT and Communication Ravi Shankar Prasad said PM’s ambitious Digital India programme is leapfrogging to the next level.

In a Tweet Ravi Shankar Prasad said: “Today you have entrusted Department of Telecommunications with the responsibility to connect all the villages of India by optical fibre Internet in 1000 days. It’s a game changer for Digital India. With your inspiration we will do it.”

Expressing his gratitude to the Prime Minister Shri Narendra Modi for this important announcement, Shri Ravi Shankar Prasad, the Minister for Electronics & IT and Communications tweeted, “Today you have entrusted Department of Telecommunications with the responsibility to connect all the villages of India by optical fibre Internet in 1000 days. It’s a game changer for Digital India. With your inspiration we will do it.”

The PM reemphasis on the connectivity project is happening at a time the government is not unable to meet its March 2020 deadline for its second phase of deployment, which was shifted to August 2021. According to media reports, BSNL failed to get any bidders for a maintenance and upkeep tender for the fibre that has already been laid.

According to Arvian Research, Prime Minister’s independence day speech on Digital India marks a major policy thrust on the government side to fuel growth of the economy with India’s software capability.

“The main pillor of the initiative is BharatNet — which envisages laying of about 8 lakh kilometre of incremental optical fibre cable (OFC) to all the 2,50,000-plus Gram Panchayats (GP) in the country at an estimated cost of Rs 42,068 crore ($6.2 billion). Now it is the time for the government to come up with solid plan to remove bottle necks in giving tendering and execution of the project,” said Arvian Research.

Along with BSNL initiative, private telecom players are also working to execute their rural connectivity programme. But the current scenario they are also facing the problem of importing telecom ecquipments and labour resources to execute their projects.

Initiated by the UPA government in October 2011, BharatNet was originally named National Optical Fibre Network or NOFN. It’s being financed by the Universal Service Obligation Fund of the Department of Telecommunications, through a 5% levy on the revenues of private telecom service providers.

Phase I of BharatNet, which commenced in June 2014 after the Narendra Modi-led government took over, was completed in December 2017. It, in fact, over-achieved the 1 lakh target for this phase by covering 1,22,908 panchayats with an investment of around $1.64 billion (Rs 11,200 crore).

In the second phase, the remaining 1,29,827 gram panchayats are to be covered through 5 km of new fibre per gram panchayats. This phase incorporates a mix of both underground and aerial fibre as well as radio and satellite connectivity to reach more inaccessible locations such as Jammu and Kashmir, Northeast, Himachal Pradesh and Uttarakhand.

Prime Minister Narendra Modi announced roll out National DIgital Health Mission (NDHM)which will give a unique health account for every citizen for hasle-free access to healthcare anywhere in the country.

“Every Indian will be given a health ID, which will work like a health account for every Indian. This account will contain details of every test, every disease and the doctors visited. It will also have information on the results of diagnostic tests and the medicines that have been prescribed,” he said.

The National Digital Health Mission will eliminate all the difficulties related to appointments with a doctor, deposting money, making a slip in the hospital, etc. The scheme will be rolled out through a pilot launch in the Union Territories of Chandigarh, Ladakh, Dada and Nagar Haveli and Daman and Diu, Puducheri, Andamana and Nocobar Islands and Lakshadweep.

According to Arvian Research, the health initiative can be compared to the Unified Payments Interface (UPI), a government-owned highway that private players can hook into to provide their applications to consumers.

“The National Digital Health Mission also paves the way for citizens to avail PhonePe, Paytm or Google Pay on the similar lines of the UPI highway. Also, the NDHM will give options to citizen to choose from several private applications on their government-owned interface. The project will have other features like data analytics tools, telemedicine, and e-pharmacy,” said Arvian Research.

The project will be monitored by a Mission Steering Group with Ministers from IT, AYUSH, Women’s and Child Development, as well as Niti Aayog Member, NHA CEO, and others. The policy-level decisions are taken by an empowered committee with Secretaries and others.

The Primie Minister also gave guidelines to new Cybersecurity policy to be rolled out in 2020 and made it very clear that it will replace the existing policy. This decision comes when globally there are various cyber security measures are taken by nation states to monitor digital companies intervention in geopolitics across borders.

Highlighting the threats from cyber space that can harm the country’s society, economy and development, the prime Minister siad it endanger all aspects of Indian life.

According to Arvian Research, India is facing security challenges with border tensions with China and Pakistan and they used social media to launch misinformation campaigns against India.

“It is a fact that the major flare up along the Pangong Lake on 5-6 May, Weibo — the Chinese version of Twitter — had featured images of Indian soldiers tied up and lying on the ground, with comparisons made to Bollywood’s muscular portrayal of the Indian Army. Also, there is a 37% increase in cyberattacks against Indian companies in April-June quarter, as compared to January-March quarter,” stated Arvian Research.

India came up with its first cybersecurity policy in 2013 in the context of leaks by US National Security Advisor whistleblower Edward Snowden that alleged NSA surveillance was also tracking India’s domestic issues. The National Cyber Security Strategy 2020 (NCSS 2020), overseen by the National Security Council Secretariat, collected public comments till January this year. These frameworks will have a bearing on incidents similar to the hacking of 121 Indians’ WhatsApps in 2019 by the Isreali cyber firm NSO Group.

Threats from organised cybercriminal groups, technological cold wars, and increasing state-sponsored cyber-attacks have also emerged. Further, existing structures may need to be revamped or revitalised. Thus, now there is a need exists for the formulation of a National Cyber Security Strategy 2020.

It may also have a bearing on a pending data protection legislation being seen by a Joint Select Committee in Parliament and which mandates some amount of data localisation in its present form.