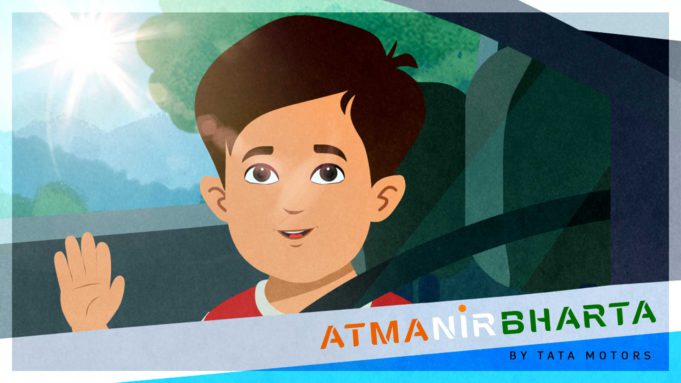 Mumbai, NFAPost: Tata Motors, India’s leading auto brand in association with WATConsult, the globally awarded hybrid digital agency from the house of Dentsu Aegis Network (DAN) India, announced the launch of ‘Atmanirbharta by Tata Motors’ – a digital campaign highlighting the existence of localisation in everything that we do.

Designed and conceptualised by WATConsult, this campaign has been released ahead of the glorious occasion of India’s 74th Independence Day and emphasises on the meaning of ‘Atmanirbharta’ or self-reliance for individuals and the nation as a whole.

Solidifying the brand’s stance for the ‘Vocal for Local’ initiative, the campaign is headlined by a video, which begins with a very young boy named Rohan shown seated in the rear seat of a Tata Nexon, while his father is driving him across the town. The son inquisitively asks his father, “Atmanirbharta kya hoti hai?” i.e. “What does Atmanirbharta mean?”.

By showing a range of occupations to his son, the father makes him understand that Atmanirbharta means being self-reliant in all aspects of life and that it applies to people from all walks of life – be it a toymaker, bangle vendor, scientist or an engineer from ISRO, who sequentially appear in the film.

The video ends with the display of Tata Motors’ New Forever range near a hoisted Indian flag, exemplifying the Company’s ability to deliver best in class products that cater to the local needs & tastes while evolving with time and being ever popular with customers.

Adding to the above, ‘Atmanirbharta by Tata Motors’ highlights that reaching the goal of being self-reliant is not an individualistic responsibility, but a collective one that falls on the shoulders of the entire country.

Commenting on the launch of this campaign, Tata Motors Passenger Vehicle Business Unit Marketing Head Vivek Srivatsa said Tata Motors has always been known as an automotive brand that is a flag bearer for products that caters to the Indian customer.

“Our cars are manufactured locally and provide world class Design, Safety and Driving pleasure to all. We are proud to be at the forefront of the conversation of being ‘Vocal for Local’. This campaign is our tribute to all the people and the homegrown businesses in India who make our country what it is,” said Tata Motors Passenger Vehicle Business Unit Marketing Head Vivek Srivatsa.

Tata Motors Passenger Vehicle Business Unit Marketing Head Vivek Srivatsa is glad that both Tata Motors and WATConsult took this opportunity to emphasise on this message, and thereby in their own small way, want to encourage the nation to understand a few aspects of being ‘Atmanirbhar’.

“Through the ‘Atmanirbharta by Tata Motors’ campaign, we want to steer relevant conversation around the subject by sharing our perspective, while encouraging our customers and the country to work towards this overarching goal,” said Tata Motors Passenger Vehicle Business Unit Marketing Head Vivek Srivatsa.

Talking about the campaign, WATConsult CEO Heeru Dingra added the company is happy to have extended its relations with Tata Motors to curate a concept on a topic that is so relevant in today’s time.

“The idea was to promote and appreciate the concept of ‘Atmanirbharta’, which is becoming a necessary trait and a motto for our nation. While the animation makes the video more endearing, the narrative seamlessly portrays the potential that India drives, in terms of talent, power and various other aspects, in today’s age,” said WATConsult CEO Heeru Dingra.

WATConsult CEO Heeru Dingra said with this video they are confident that they will be able to help each one to understand the importance of being self-dependent along with respecting all the workers from different strata of life who are in their own way making our nation self-reliant.

This campaign’s concept takes an adaptive approach by using an animated video for the film as a substitution for a live action version, keeping into consideration the ongoing need for physical distancing. Initially launched in our national language – Hindi, this video will also be translated in English and multiple other regional languages to create a nationwide resonance.

Tata Motors Limited, a $44 billion organisation, is a leading global automobile manufacturer of cars, utility vehicles, pick-ups, trucks and buses. Part of the $110 billion Tata group, Tata Motors is India’s largest and one of the few OEM’s offering extensive range of integrated, smart and e-mobility solutions.

It has operations in India, the UK, South Korea, Thailand, South Africa, and Indonesia through a strong global network of 134 subsidiaries, associate companies and joint ventures, including Jaguar Land Rover in the UK and Tata Daewoo in South Korea.