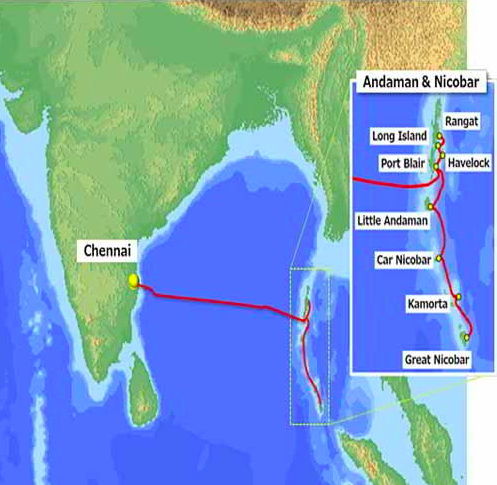 Bengaluru, NFAPost: NEC Technologies India announced the completion of a major part of Chennai-Andaman undersea cable project which was inaugurated by the Prime Minister on 10th August.

The company in a statement said it is indeed a matter of great privilege and honor to be a part of the first ever 2,312-kilometer undersea optical fibre cable project for Island connectivity in India.

Connecting Chennai and seven islands of Andaman & Nicobar Islands, this project brings high speed broadband connectivity in the union territory to boost tourism and generate new employment in the Islands. This will lead to an increase in the standard of living and will further result in augmenting the economy of the Islands.

Enhanced connectivity will also facilitate delivery of e-Governance services such as telemedicine and tele-education. Small enterprises will benefit from opportunities in e-commerce, while educational institutions will utilize the bandwidth for e-learning and knowledge sharing which will eventually play a significant role in driving the “Digital India” vision.

“We are proud to be chosen by BSNL for executing this project of immense national importance. We also would like to express our sincere gratitude to all of the stakeholders for their support and guidance in helping us successfully deliver this project under the current tough circumstances due to COVID-19,” said NEC Technologies India.

With the commissioning of the fiber link, Airtel has become the first mobile operator to launch ‘Ultra-Fast 4G’ services in Andaman and Nicobar. The blazing fast speeds on Airtel’s 4G network will deliver a world-class digital experience to customers on the islands.

“We are grateful to the Hon’ble Prime Minister for taking the time to launch this key digital infrastructure. Airtel remains fully committed to the Government’s vision of Digital India. We hope the Department of Telecom will accelerate the deployment of USOF for building such infrastructure backbone to complement the efforts of telecom operators to bridge the digital divide,” said Sunil Bharti Mittal.

Airtel has been serving customers in Andaman and Nicobar since 2005. It was the first private operator to launch mobile services in the islands. With today’s launch of ‘Ultra-Fast 4G’ network, Airtel looks forward to further strengthening its bond with customers on the islands.