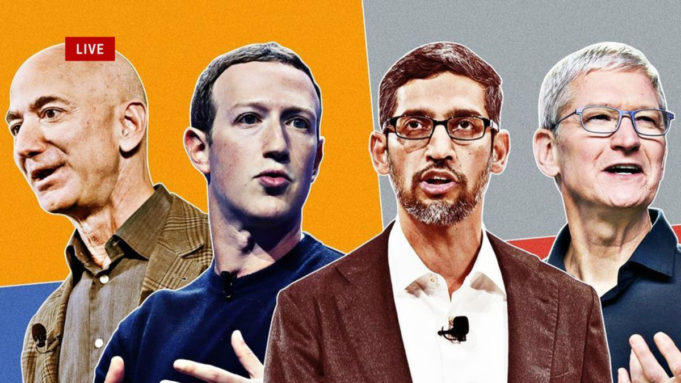 In the antitrust US hearing, Rep Matt Gaetz grilled Google CEO Sundar Pichai for dropping out of Pentagon contracts and addressed the company’s work with Chinese military treasonous.

“The former Secretary of Defense Mr Shanahan said that the lines have been ‘blurred’ in China between commercial and military application, and as Mr Buck cited, ‘General Dunford says that your company is directly aiding the Chinese military.’ And Peter Theil (Paypal Co-Founder), who actually serves on Mr Zuckerberg’s board at Facebook, said that Google’s activities with China are treasonous.’ He accused you of treason,” Gaetz said.

Buck has been an outspoken critic of the CCP’s tactics and introduced legislation in the House yesterday based on Sen Josh Hawley’s “Slave-Free Business Certification Act,” which attempts to hold US companies accountable for any use of forced labor throughout the supply chain.

“Our AI work in China is limited to a handful of people working on open source projects and happy to share and engage with the office to explain our work in china fully,” he added.

But, Gaetz called into question Google’s commitment to the US and its values by not working with AI centre based in the country, but working with Chinese universities.

“When the Chairman of the Joint Chiefs of Staff says that an American company is directly aiding China, when you have an AI center, when you’re working with universities … it seems to really call into question your commitment to our country and our values,” he said.

Gaetz also accused Google for refusing the AI contract called Project Maven with the Department of Defense (DOD) in June 2018 after it weighed input from its employees.

“Did you weigh input from your employees when making the decision to abandon the project with the U.S. military?” Gaetz asked Pichai, who replied that the company is deeply committed to supporting the military and US government and take decisions on a variety of factors.

In reply, Gaetz rapped Pichai for having ethical concerns about working alongside the US military on Project Maven, but brazenly aided the Chinese military.

“Google has an AI center, collaborates with Chinese universities and is helping China to advance the targeting capabilities of their J-20 fighter aircraft, according to a paper published by the Chinese Academy of Science,” Gaetz said, pushing back on the firm’s ethical choices.

“And I understand your point about cyber security and those things, but Project Maven was a specific way to ensure that our troops are safe on the battlefield, and if you have no problem making the J-20 Chinese fighter more effective in its targeting, why wouldn’t you want to make America as effective?” Gaetz added.

Pichai did not address the accusations on Google’s work specifically with J-20 aircraft and gave a general answer, saying, “We are not working with the Chinese military, that is absolutely false.”

Meanwhile, Buck asked for federal investigation into Facebook’s acquisition of Instagram as circumstances surrounding the deal were suspect.

“It’s one of those things where you can look back on it now and say, ‘Instagram wouldn’t be where it is now if it weren’t for Facebook’s resources and the merger.’ But I do agree with Chairman Jerry Nadler that there are many red flags about that merger and it should be carefully scrutinized by the Federal Trade Commission (FTC),” Buck said.

Congress will continue its investigation into big tech and likely release a report on the findings before the November election, in an effort to lay the groundwork for legislation when new lawmakers are sworn in come January, he said.

ViewSonic Launches New, All-in-One Direct View LED Displays with Sizes of Up to 216″

Toshiba Unveils ULTIMATE 4K TVs; To Be Made Available From 18th September