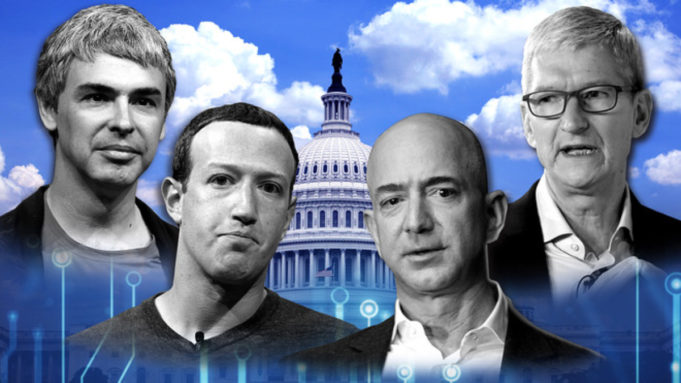 A big news is awaited tonight here in India. But, the action will unravel thousands of miles away in the US.

At 9.30 pm IST, the tech CEOS, Sundar Pichai, Mark Zucherberg, Jeff Bezos and Tim Cook, will appear together at a congressional hearing to argue that their companies have not violated the antitrust laws and did not stifle competition.

But, before going into the main issue, let us understand what antitrust law means.

Antitrust laws are designed by the US government with an objective to make sure fair competition remains in the market. They prohibit companies making efforts to maintain monopoly through corrupt means like price-fixing, anti-competitive corporate mergers and predatory acts.

Simply put, antitrust laws prevent companies from making and boosting their profits by playing dirty. In the absence of these laws, consumers will be deprived of better prices.

The laws allow the government to intervene and stop companies trying to establish a monopoly and striking off competition.

To understand the case of the CEOs of Apple, Google, Facebook and Amazon, appearing before the congressional committee, it is better to focus on the Microsoft antitrust case.

The company’s rising presence in the personal computing market had raised alarm bells with federal authorities in the 1990s. Bill Gates, Microsoft Founder, was lucky as the Federal Trade Commission closed its investigation into Microsoft’s bid to create a monopoly.

However, the investigation was picked up by the US Department of Justice (DoJ). The department, along with 20 attorney generals, filed antitrust charges against Microsoft for giving away its browser software for free which resulted in the collapse of Netscape.

The Bill Clinton government had accused Microsoft of making it difficult for consumers to install competing software on computers operated by Windows.

As usual, the lobby, majorly composed of the vociferous economists, gave misleading statements and made antitrust laws into a case of protectionism.

A group of economists even had published a full-page open letter to Clinton in major newspapers, backing Microsoft stating that laws were anti-consumer.

In the trial, Microsoft claimed that its competitors were jealous of its success and supporters went to the extent of terming Microsoft’s monopoly as non-coercive – meaning that consumers prefered Microsoft’s Windows product on their computers than Unix, Linux and Macintosh.

Despite all these jingoistics efforts, Microsoft lost the case. The presiding judge, Thomas Penfield Jackson, ruled that Microsoft violated parts of the Sherman Antitrust Act, which was established in 1890 to outlaw monopolies and cartels.

He found that Microsoft’s position in the marketplace constituted a monopoly that threatened not only the competition but also innovation in the industry.

Jackson also called for Microsoft to divide the company in half and create two separate entities that would be called baby bills. The operating system would make up one half of the company and the software arm would make up the other.

Microsoft appealed the decision and charged the judge for giving a biased verdict in favor of the prosecution.

The appeals court overturned Jackson’s decision against Microsoft. Instead of seeking to break up the company, the DoJ decided to settle with Microsoft.

In its settlement, it abandoned the requirement to break up the company, In return, Microsoft agreed to share computing interfaces with other companies.

The company’s market share eroded due to old-fashioned competition.

Coming back in the present, the captains of the new age will appear to justify their business practices after members of the House judiciary’s antitrust subcommittee had investigated into the accusations of stifling rivals and harming consumers.

The tech giants, who run companies worth a total of around $4.85 trillion, would argue that their businesses are not really that powerful.

Amazon is accused of abusing its role as a retailer and  platform hosting third-party sellers on its marketplace, while Apple is accused of unfairly using its clout over its App Store to block rivals and to force apps to pay high commissions.

Rivals have said Facebook has a monopoly in social networking. Alphabet, the parent company of Google, is dealing with multiple antitrust allegations because of Google’s dominance in online advertising, search and smartphone software.

For these tech captains, the hearing will be a test of their mettle, who are under fire.