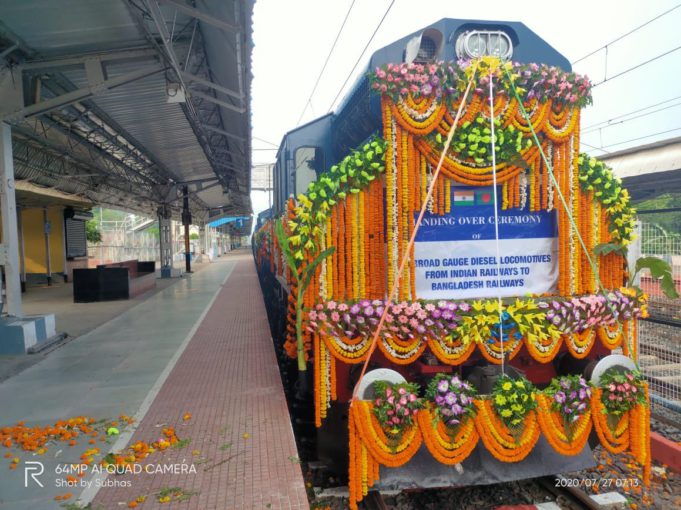 Hyderabad, NFAPost: Ten broad gauge locomotives from various loco sheds in India have been handed over to Bangladesh on Monday, providing the neighbouring country mobility solutions for both intra-country and inter-country movement.

The transfer of the locomotives to Bangladesh Railway (BR) is a part of a commitment made during Bangladesh prime minister Sheikh Hasina’s October visit to India.

Senior dignitaries from both the countries, including foreign ministers, railway ministers, high commissioners and Railway Board Chairman apart from station officials at both sides of the border, took part in the handover, which was conducted via a video conferencing owing to the coronavirus pandemic.

The decorated locomotives were lined up at Gede Railway Station, in Eastern Railways’ jurisdiction in West Bengal’s Nadia district, on the Indian side while Darshana on Bangladesh’s side received the locomotives.

Bangladesh had sent a proposal to India in April last year for procurement of these locos, with 72% of its present ones already crossing their economic life, according to a statement from the Railways.

The 3300 HP WDM3D locos have a residual life of 28 years at least and are designed for a speed of 120 mph.  They can haul both freight as well as passenger trains and have a microprocessor-based control system.

The Railways have modified the locos to suit the maximum height restrictions in Bangladesh Railway. The Indian Railways have also expressed an interest in further supply and maintenance of all types of rolling stock.

The handover of locos will strengthen the partnership between both the transporters, according to the Railways.

India’s ties with Bangladesh through Railways

India has also, in the recent past, sent five freight rakes to Benapole in Bangladesh. Two rakes of turmeric were sent from Nizamabad in Telangana while two rakes of chillies were sent from Reddipalem, Guntur, Andhra Pradesh.

On Friday last, India also sent an export container train to Bangladesh from CONCOR’s Container Freight Station (CFS) at Majerhat in Kolkata to Benapole. With total 50 containers, the train carried FMCG in 40 and fabrics in 10 while the Indian exporters were Procter & Gamble, Arvind Ltd and Vardhaman Textiles.

Indian Railways have always been exporting locos to Bangladesh Railway. In 1996, India sent 10 meter-gauge locos and around 40 locos found a home in BR between 2001-2014. Indian Railways had exported 120 passenger coaches also in the last five years.

India is also involved in providing assistance in 17 railway sector projects, including the supply and delivery of rolling stock, signalling equipment, in the Line of Credit, a commitment worth $2.4 billion. The projects include the Kulaura-Shahbazpur line at a cost of $78 million, likely to be completed by end of this year, and the Khulna-Mongla railway line project worth $389 million, includes a railway bridge, is likely to be completed by June 2021.

Apart from these, a 12-km cross-border rail link is being built under grant-in-aid between Agartala and Akhaura town on the Dhaka-Chittagong trunk line. This is likely to be completed by March 2021 and will further enhance freight and passenger connectivity between India and northeastern states.