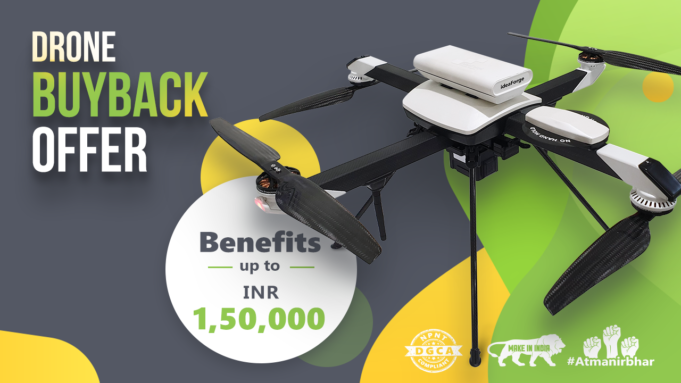 Organizations can avail benefits up to INR 1.5 lakh when they exchange their non-compliant drone for ideaForge’s DGCA-approved NPNT-compliant NINJA UAV for their mapping applications.

The comprehensive list of benefits under the drone buyback offer package includes cash discounts in exchange for non-compliant drone and additional hardware such as batteries & charger at no extra cost.

The offer also gives 20% discount on purchase of new ideaForge product, and services  which includes an extended support package for additional 1 year or 500 cycles, redeemable upto 3 times, at a discounted price,  enabling the lowest cost of ownership globally to its customers in this class of drones.

Since cash flows are a major concern at the moment, buying a mapping drone to run a business can be challenging. Taking this into consideration, ideaForge has also announced the industry’s first financing option for drones with the aim of helping the industry, partners, and other stakeholders. Surveyors can also choose to finance their drone from our partners. For details, visit www.ideaforge.co.in/drone-buyback-offer

“ideaForge has been on the forefront of building Made-in-India drones and creating a sustainable drone ecosystem in India. With our one-of-its-kind drone buyback offer, we have created a platform for surveyors to adopt indigenous technology for mapping a self-reliant India,” said ideaForge VP – Surveillance and Mapping Business Vishal Saxena.

ideaForge VP – Surveillance and Mapping Business Vishal Saxena said the company is confident that the offerings will reduce the dependence on imported drones which do not comply with Indian regulations.

Built on a strong foundation of interdisciplinary engineering, ideaForge has become a global leader in UAV technology. Its drones offer class-leading performance and reliability, and have been widely adopted for defence, homeland security and enterprise applications.

In India, ideaForge has over 90% market share in the security and surveillance market of homegrown drones. The organization has deployed over 800 systems and has trained over 1300 pilots in services including Indian Defence Forces, Central Armed Police Forces and Police Forces of several Indian states.

ideaForge has a diverse list of industrial customers as well in sectors such as construction & heavy engineering, power & utilities, transport and logistics, mining and many more. For more information