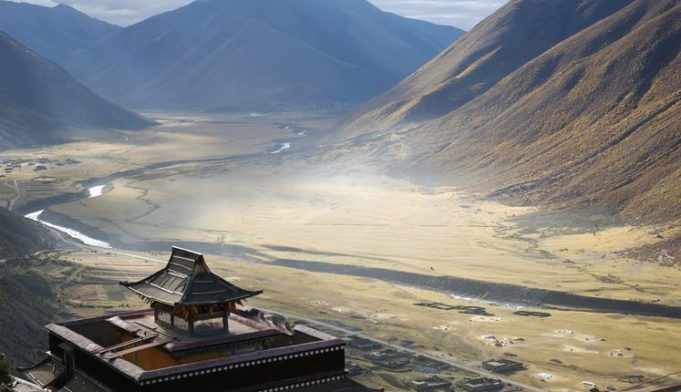 China warned India that it will open new fronts in the Himalayas soon after the violent face-off between Chinese and Indian soldiers in Ladakh, along the Indo-Tibetan border last month; clashes that will lead to heavy losses for both India and China.

At the height of the global coronavirus crisis, the world’s media has focused on China’s military aggressions in Ladakh and Sikkim.

But, the root cause of China’s military incursions across the Indian Himalayan borders is barely known by the Indian public.

This article aims to explore the geo-strategic importance of Tibet in a fundamental strategic blueprint for the protracted India-China dispute over the Indo-Tibetan border.

China’s military aggressions in India, Bhutan and Nepal are strategically designed by the Chinese communist leaders’ perception that Tibet is the palm (of a hand) and the Himalayan regions are the five-fingers.

China considers Tibet as the palm and Ladakh, Nepal, Sikkim, Bhutan and Arunachal Pradesh as the five-fingers.

In the early 20th century, British India adopted its forward policy towards Tibet to expanding her market options, and at the same time, the British desired to establish Tibet as a buffer against the Czarist Russia’s threats towards India.

The British successfully made Tibet a buffer state between Russia, China and British India after British India’s short invasion of Tibet in 1903.

Subsequently, Chinese nationalists viewed the British invasion of Tibet as a security threat to China in its own backyard.

The Communist Party of China meanwhile established the People’s Republic of China (PRC) on October 1, 1949, and soon after, China invaded Tibet in 1950.

Subsequently, centuries old a zone of peace between India and China disappeared.

After China’s occupation of Tibet, the first ever Sino-Indian military face-off was seen at the world’s highest border point – the Himalayas.

Since then, thousands of Chinese military incursions have taken place across the Indian Himalayan borders.

By invading Tibet, China asserted Tibet as a treasure in its strategic assets to speed up its expansionist policies towards the Himalayan nations and beyond.

Mao Zedong, the founding father of the PRC, and a firm believer of Sun Tzu’s strategic doctrine – “the Art of War”, strategized Tibet as the palm of China to expand its sphere of influence in South Asia.

China invaded and occupied Tibet in order to bring the ”five-fingers” of the Himalayan regions under its supremacy.

The 2017, Doklam stand-off and China’s recent occupation of a Nepali village called Rui Gaun in Gorkh district are just the tip of the iceberg of China’s military aggressions in the five-fingered Himalayan region.

Today, China is actively encroaching in the Himalayan border regions of Ladakh, Nepal, Sikkim, Bhutan and Arunachal Pradesh to further encircle India as a means of boosting “China’s Strategy of Encirclement India”, which aims to an encircle India on different fronts.

Professor Ashok Kapur rightly illustrated “China’s Strategy of Encirclement India” in his book entitled “India and the South Asian Strategic Triangle”, where he writes “The China – India war of 1962, created a military front in the Himalayan regions. The PRC-Pakistan strategic partnership has created a diplomatic with security and defence fronts against India. The encirclement of the Chinese port facilities in Myanmar, Sri Lanka and Pakistan has created commercial and trade fronts against India”. All these geo-strategic tensions are strategic ramifications of China’s aggressive policy towards India.

Strategically, the Tibetans were the first line of defence for India. They ultimately safeguarded the 3,488 kilometre long border from Ladakh to Arunachal Pradesh.

Since the disappearance of Tibet as a traditional buffer state between India and China in 1950, the two Asian giants have faced military escalations along the Indo-Tibetan border.

The centrality of the Tibet issue in Sino-Indian geo-strategic relations is an ultimate resolution by which to resolve the Sino-Indian dispute over the Indo-Tibetan border.

The renowned international scholars on China such as Mohan Malik, Professor Dawa Norbu, and Brahma Chellaney argue that Tibet lies at the heart of the Sino-Indian relations.

Professor Dawa Norbu explicitly stated that “The crux of the Sino-Indian strategic rivalry is this: if the Chinese power elite consider Tibet to be strategically important to China, the Indian counterparts think it is equally vital to Indian national security”.

The present Chinese leadership has recognized the Tibet issue as a core issue of China’s national security and strategic engagement in South Asia.

Thus, this is the right time for India to craft a new national Tibet policy, because China’s strategizing of Tibet as their nation’s palm and Ladakh, Nepal, Sikkim, Bhutan and Arunachal Pradesh as the five-fingers of Tibet is not a rhetoric.

It is happening now – in the Himalayas.

(The NFAPost has content sharing arrangement with The Taiwan Times)

New Paint On Door One : A Bond Update

Six Tips To Stay Productive While Working From Home

Decoding Pledging Of Shares And Upfront Margins In Cash Market!