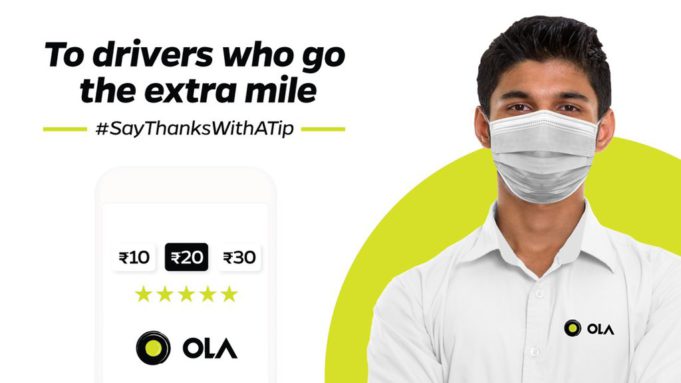 Amritsar, NFAPost: Ride-hailing giant Ola has rolled out a new feature for its users across India, Australia, New Zealand, and the United Kingdom, wherein riders can now tip their Ola drivers.

The company said that riders in each respective market will get to see a range of denominations, which they can pick as the amount they wish to tip the driver digitally.

The cashless tipping facility provided by Ola app appears at the end of the payment phase. Riders can choose to pay either a customised tipping amount or a fixed one. The option will be available for all category customers.

The launch of this feature by Ola comes following food delivery apps such as Zomato and Swiggy introducing in-app tips in a similar way in view of the pandemic situation.

Ola’s new feature is a way of appreciation to its drivers who have battled their way during this pandemic situation, the company said. The company said that the amount of tips paid by a customer will be directly credited to the driver’s account.

“Since the beginning of the pandemic, our driver-partners have worked tirelessly to enable essential travel for all those in need, despite facing their own challenges. As services resume, they continue to personally invest in ensuring the safety of their customers and deliver a comfortable ride experience,” Ola Spokesperson Anand Subramanian said.

Subramanian added “… Not only will the new functionality provide an opportunity for drivers to increase their earnings but will also showcase how a small gesture of solidarity and support from customers will drive our driver-partner community to go a long way.”

Ola has also launched a social media campaign with regards to this new feature with a hashtag #SayThanksWithATip.

Earlier in the recent months, Ola had announced a range of relief packages including exempting lease rental to assist its driver partners. The cab aggregator has also committed to provide driver partners with a few hundred dollars if their family members test positive for Covid-19.

Uber, however, is yet to offer any significant help to its driver partners in India.