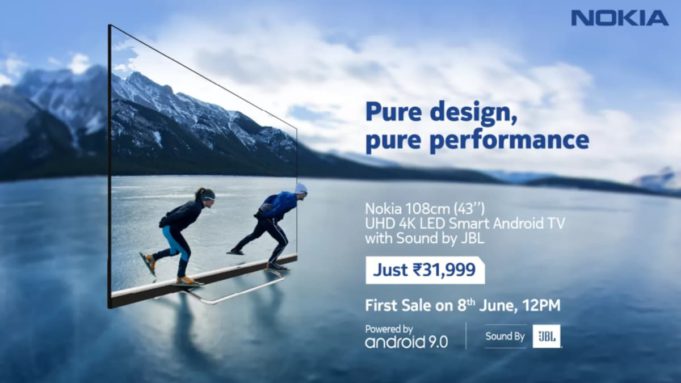 Bengaluru, NFAPost: Nokia Smart TV 43in model has finally launched in India after its official teaser made waves on the company website in March. The launch delay has been attributed to the ensuing nationwide Covid-19 lockdown as several businesses came to a standstill.

Flipkart has built the new Nokia Smart TV 43in as part of its licensing deal with Nokia. The 43in model is the younger sibling of the 55in variant that was launched in December 2019.

Nokia Smart TV 43in will debut sales exclusively on Flipkart starting 8 June at 12pm IST. It will be available in a single Black variant at Rs. 31,999 in India.

Prospective buyers may register their interest by clicking the ‘Notify Me’ button on the Flipkart product-listing page. The e-commerce portal has showcased a bunch of attractive offers including 10 percent off on Axis Bank Buzz credit card, Rs. 1,500 off on Citi debit and credit cards, 5percent unlimited cashback on Flipkart Axis Bank credit cards, and no-cost EMI options starting at Rs. 2,667/month.

Six months of free YouTube premium trial is also being offered by Flipkart with this purchase.

Featuring a 43in 4K Ultra HD LED flat screen, the new Nokia Smart TV display comes with 300nits brightness, 60Hz refresh rate, 16:9 aspect ratio and 178-degree viewing angle. The flat screen is supported by a V-shaped fluid chrome pedestal stand akin to the 55in variant with slim bezels on all sides. It weighs around 9.4Kgs with the stand.

The Nokia Smart TV has two onboard speakers with a total output of 24W. The speakers support the latest home theatre capabilities like DTS, TruSurround and Dolby Digital audio.