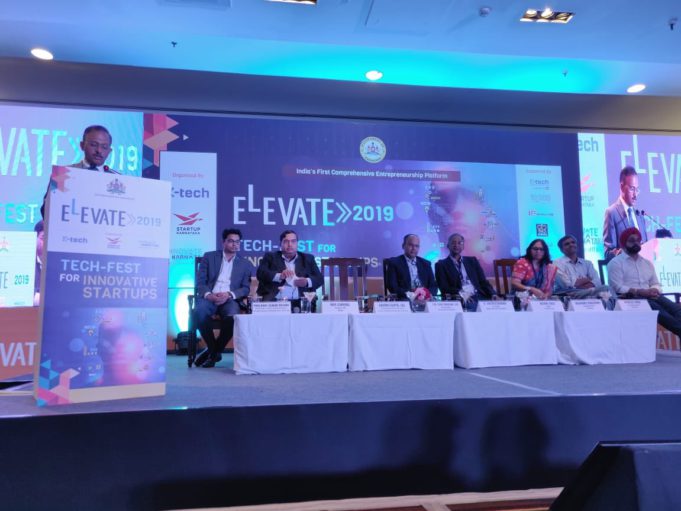 Bengaluru, NFAPost : Government of Karnataka declared 100 startup who won Elevate 2019, the flagship startup incubation programme organised by the startup cell of the IT & BT Department.

The Elevate Programme was launched in August 2017. As part of the programme, the Karnataka government provides a comprehensive entrepreneurship platform that includes idea validation, funding, and space, among others.

“Department of IT, BT and S&T, Government of Karnataka launched call for Elevate 2019 on 8th March this year. The Department received a total of 729 applications and after two stages of shortlisting and multicity pitching we shortlisted 270 startups. This year 270 startup pitched their ideas before the grand jury on last Monday. We have seen 60 startups from tier 2 cities. Bengaluru became the number one city with maximum number of startups participating in the event,” said Gaurav Gupta.

Gaurav Gupta said 23 of the 100 startups are from Tier II and III cities, including from Chamarajnagar and Bijapur. Since the inception of the Elevate program, 264 start-ups have been supported with total committed fund of about Rs. 64 crores.

“We are proud to say that Karnataka government is the only state in India to come up with solid startup policy to further cement its innovation competitiveness ahead of other global locations,” said ” Gaurav Gupta.

The Elevate Programme has been receiving overwhelming support from tech enthusiasts, entrepreneurs, academics and corporates.
The programme sees finds support from the industry, the Deshpande Foundation, TiE, Centres of excellence, NASSCOM, and various industry associations.

Gaurav Gupta pointed out that the previous winners of Elevate Karnataka have made great impact in their respective fields. He said the Elevate 2018 winner Niramai Health Analytix, an AI-based healthtech startup, has succeeded in raising $6 million in Series A funding led by Japanese VC firm Dream Incubator, Beenext and other investors.

“We have been seeing groth of Elevate Karnataka startup along with other startup ecosystem. The Elevate 2017 winner Bellatrix Aerospace secured funding from Survam Partners of the Suman Kant Munjal family and Deepika Padukone. Lot more startups are different stages of fundraising,” said Gaurav Gupta.

Speaking on the occasion, Government of Karnataka Chief Secretary T M Vijay Bhaskar said he is happy to find that 30% of startups have women co-founders.

“It is a matter of immense pride that Karnataka is the first state in the country to initiate grant in aid to start-ups without taking equity. We are headed in the right direction of creating a robust start-up ecosystem across the state, providing motivation to the brightest minds to explore opportunities for growth. Bengaluru holds the crown of “India’s Start-up Capital” with the highest funding in India of $5.12 billion out of a total of $13.88 billion, ” said T M Vijay Bhaskar.

Elevate 2019 also had participation from ex-entrepreneurs who changed the perspective of the investment community and tech community on opportunities in Karnataka.

Speaking at the valedictory ceremony, Again Drinks Co-Founder and TEDx Speaker K Vaitheeswaran said the outcome of success of a startup company is not in the hands of the entrepreneur alone.

“The people inside the company, the external environment, regulations, etc, all determine success. Remember this algorithm – 99% of startups will fail. But 100% of entrepreneurs will succeed,” said K Vaitheeswaran.

As part of the event, Elevate 2019 also had talks by industry experts and panel discussions on relevant topics affecting startups like the investment landscape, empowering startups for growth and impact,  Design and IP laws.

Speaking at Elevate Karnataka, UniKwan Managing Director Prabuddha Vyas explained on  the history of design. “Bauhaus, a design institute which started in Germany, had a profound and seminal influence upon subsequent developments in art, architecture, and design. Even Apple was influenced by Bauhaus indirectly said Prabuddha Vyas.

CWE Founder and CEO Suchitra Eashwar said spoke about the state of affairs of women entrepreneurs. “Only 14% of all enterprises are owned or led by women. A lot of them are in the micro sector. But women-led startups are also the fastest growing sector, ” said Suchitra Eashwar.

The state government officials confirmed that Karnataka will soon set up an Innovation Authority headed by the Honourable Chief Minister to empower start-ups to overcome legal hurdles in innovating technologies and ideas.

Windows Internet Security: Which Software Protects You Best and Which Slows...